Its that time of year again when you are planning or anticipating your summer holiday. If you are staying at the Holiday World in Benalmadena with First Choice or Thompson Holidays. Or at The Polinesia Hotel Holiday world, then be sure to check my comedy hypnotist show dates on arrival. You can ask the reps or the Entertainment team at the welcome meeting.

This year  I have some dates for the comedy hypnotist show booked around the Marbella area. Some private and some public shows.

The Holiday Village has two stages. One indoor for the off-peak season ( it rains sometimes!). One outdoor stage which has about 1200 guests entertained by me and other shows from about the first week in June through to about late September. After then, its the inside venue. The Entertainment crew here are flown in from england after intensive training, and have a minute by minute schedule of events and games, and year on year are my favourite warm up team.

The Polinesia has three venues. In off season the shows can either be in the smaller Ukulele Disco Bar holding two to three hundred guests, or in the larger Sala Valero Conference room which holds up to eight hundred. The Entertainment team here are usually Spanish but do speak english and some french as this is a mixed nationality hotel.

Although working a multinational hotel has its challenges, I have been presenting my hypnosis show here since 2008 in Spanish and English. Most of the guests are either Spanish or English with a small percentage from other countries. 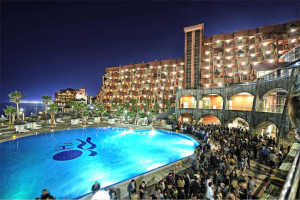